Michael Loftis II from http://www.westroke.com/ hooked up with the J.A.W. this past GAF weekend for a free demo of the all new 2013 Jackson Kayak Super Star!  Here is his review: 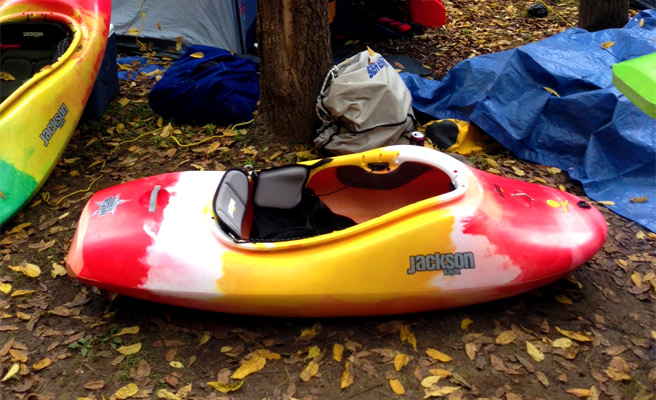 This past weekend during the GAF I got the opportunity to paddle the new 2013 Super Star. Granted the Nanthala isn’t the best place to really test a high performance playboat (at least it was higher flow than normal), but it still gave me some good insight as to the performance of this boat. Now, Kevin already reviewed the new 2013 Jackson Kayak All Star and loved it. But how will the next size up handle me? Let’s see.

First a bit about myself. I weigh in somewhere between 230 and 240 depending on how hungry I was the day before. My inseam is some where around 34 inches, and I am about 6’2. I have been wanting to have a single playboat to do it all. Unfortunately my love of food limits me from this. I have my Mon-Star as my river running playboat and my Rockstar Large as my park-n-play.

The Mon-Star has been great to me, I always feel super stable in it and it performs great in that funny water that normally destroys me in edgier playboats. Problem is that it’s a barge. I mean at 74 gallons, it’s near the size of a creekboat. It’s also not that retentive for me in holes and waves but part of that is due to the smaller waves we have in my area.

The Rock star large is a lot of fun for me. Very retentive in waves and holes, and the soft edges makes it fairly loose. The stern still grabs me if I am slow on my spins, but that is probably due to my heavy rear end, and not being as agressive as I need to be.

The New 2013 Super Star looks like it may very well fill that gap for me. The boat definitely felt faster than the Mon-Star and Rockstar. I felt like I was sitting at a good depth in the water and never did I have that grabby feeling as I have had in other types of playboats. At one point I had to collect a boat that had lost its owner. Normally when I tether myself to another boat in my Rockstar, I feel like there is a 50/50 chance that it will end poorly. In the new Super Star, it felt about the same as it did when I was in my Monstar, probably something to do with the extra volume in the stern. I really didn’t get that much time to surf as I would have liked, but what little I did i was pleasantly surprised. The boat was very retentive, just as much as my Rockstar if not more.

Let me say that I have never been a fan of Jackson outfitting. Love their boats, just hating on the outfitting. I get why they do it, but I always feel like I have a spaghetti monster in my boat. Not to mention that not only do i have to warm up myself, its almost like i have to warm up my outfitting as well. Sounds silly, but way too many times have I hopped in one of my jackson boats to start paddling, to only have a rope cleat get loose, and I find myself sitting nearly on the stern of my boat. The updated outfitting felt a lot better to me (Even though I know that cleat is waiting to kill me). I was dreading to have to mess with the outfitting like that of my other jackson boats, but I had no problems hopping in, and really feeling locked in. Had no problems with the cleat, nor did I get that rope burn that the Jackson boats like to give you on the back of your love handles. I was using the Sweet Cheeks 100 and im pretty sure that if I had tried it with the 200 that Kevin had (and hated) I wouldn’t have been able to fit. Any higher up would have probably cut off the circulation in my legs.

I really like what the have done with the design of the new 2013 Super Star. The reallocation of volume, redesign of the hull, updated outfitting, etc really has made it a great river runner and playboat. Looking forward to paddling one again on a river with more beef.

Would like to thank Wesley Bradley of World Kayak and Team Jackson Kayak for letting me demo the 2013 Jackson Kayak Super Star. For more information on the new Star Series, go to http://www1.jacksonkayak.com/jk-kayaks/whitewater/2013-all-star/. Hit the specs/pricing link to see the Super Star specs.