Being heavily involved in the kayak fishing community has its perks.  As a Jackson Kayak Regional Team member I have gotten to know so many individuals who I now call friends.

One of such individuals and avid kayak angler, teammate and a great human being, called Justin Hausner hosts bass fishing tournaments in the Finger Lakes area in New York, which is not to far away from my hometown, Ottawa, ON.

Early this bass fishing season, Justin contacted me to let me know about a kayak fishing tournament he was thinking about hosting in October.  This tournament would be an open invite to all the kayak fishing clubs in the Northeast of the United States and he was extending the invitation to the club I have the privilege to preside, KAAO – Kayak Anglers Association of the Outaouais.

So the Northeast Kayak Fishing Challenge was born.  It was programmed to take place on October 14, 2017 on Lake Champlain in Ticonderoga, NY., where representatives of clubs from New York, Vermont, Connecticut, Maine and -guests- Ottawa/Quebec (which we will call Canada from now on) attended.

The rules were simple:

Never having fished Lake Champlain in Ticonderoga, all five of the Canadian contingent started working on a game plan.  We gathered as much information as possible from forums (reading past posts), YouTube and asking around for tips from contacts that have been there before.  To be quite honest, for the longest time I thought it was a smallmouth fishery until two days before the trip, when a good friend of mine and a very reliable source told me it was in fact predominantly a largemouth heaven.  Needless to say I had to change my game plan.  Luckily I was still home to do so.

Our trip began right after work on Thursday (the tournament was on Saturday) when my friend Dave Fowler (originally from Newfoundland) picked me and my trailer up.  We drove two hours and we met with André Frenette (originally from New Brunswick) at the border between Quebec and New York at the Duty Free Shop, where we filled-up my Orion Cooler 45 with refreshing beverages.

We made it to Ticonderoga at around 10:00 PM and set up camp.

The temperature dropped quite a bit but luckily we were prepared with a portable heater that kept us -kinda- comfortable during the night.

(Yep, we got some frost overnight)

Friday started out as a beautiful -chilly- day but unfortunately the winds picked up to about 15-20 mph constant!

Needless to say, personally, I got skunked.  Only lost 3 lures to what I believe were pike.  André and Dave each caught one bass.

The turning point of that day was when Dave and I saw André flip over his kayak about 100 yards away from us.  Luckily he didn’t lose any gear, except for his net that was floating close to him.  Once I was right next to him I couldn’t resist taking a picture of him swimming in 61-degree water.  I didn’t do it to make fun of him, but to congratulate him for wearing his PFD and to make my social media followers aware as to why it is so important to wear your lifejacket at all times.

(Hull full of water and André wearing his PFD)

Now, André is a big boy and he was also wearing dry pants.  But more than preventing your clothes to get wet if raining, once the water finds a way inside, they keep it in until you take them off to drain them.  Well, all that water added to André’s weight.

Dave and I had to position our  boats on each side of André’s kayak to stabilize it so he could get back on it.  In André’s words: “Getting back on your kayak is only half the battle.  Repositioning yourself back on the seat is the other half.  So practice your deep-water re-entry!”

Once back on the boat, we paddled behind him back to the launch to empty the water from inside his hull and for him to change into a dry set of clothes.  And we went back to try and locate some fish.  We were unsuccessful.

At this point we were back to square one and we were going to try a different plan for tournament day.

That night the rest of the Canadian team arrived to the campground.  Tommy Doucet (originally from Quebec) and Michael Cox (originally from Nova Scotia) completed the representation from Eastern Canada (Newfoundland, Nova Scotia, New Brunswick, Quebec and Ontario).  Also we got together to have a few refreshing beverages with to New Yorkers, Brian Baulsir and Kurt Hommel, two real gentlemen and a joy to talk to.  Between the seven of us we discussed strategies mainly to stay protected from the southernly winds, which were predicted to get stronger during tournament day.

The following morning we had our meeting and took off to the launch.  These were unknown grounds to all of us.  The winds were even stronger than during our pre-fishing, but our spirits were high and full of hopes.  The water was very dirty and choppy.

It wasn’t until around 9:00 AM when I hooked on my first fish.  Unfortunately for me it was the wrong kind: a white perch (a new species for me). 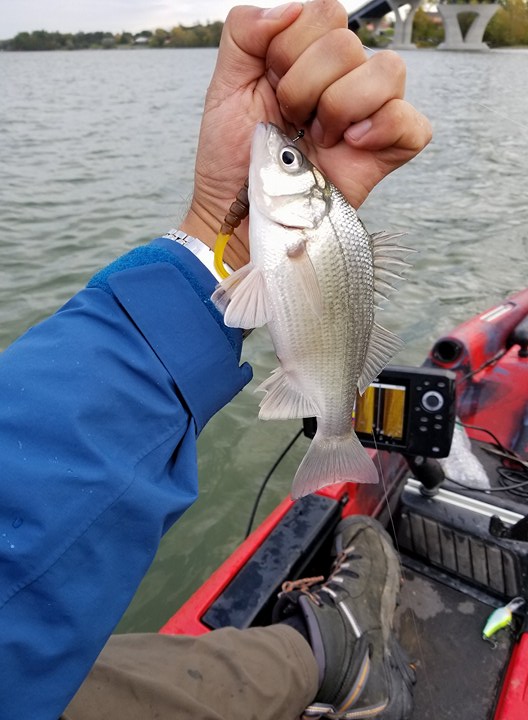 I must’ve tried everything that morning.  And to be quite honest, I was starting to feel quite discouraged because the largies were not quite cooperating…until 11:00 AM when I decided to change spots.  Then the fun began!

Using nothing else but green tubes, Tommy and I began catching fish and were on a mission to empty the spot.  I really didn’t care who would end up taking the win, as long as people would start catching fish.  And boy, did we catch big fish.  There was a point when we were about 5 or 6 anglers throwing different lures to the same area and I can safely say that it produced about 30-40 fish.  Many of them being quality fish!

(My best five fish of the day)

As I was submitting my catches I was looking at my name climbing places until I reached the top, but I kept my eye very close on Brian Baulsir, a great angler and well renowned in the NY region.

I knew Brian had some fish in his virtual livewell but it was already 1:30 PM and I had to start paddling back to the launch to load the kayaks back on the trailer to be at the meeting place by 3:00 PM (we still had a 20-minute drive).  At this point I felt I had a comfortable lead, but wasn’t counting out any if the other competitors.

About 15 minutes before last cast (2:00 PM) I decided to refresh my Tourney X app and to my surprise, this is what I saw!… 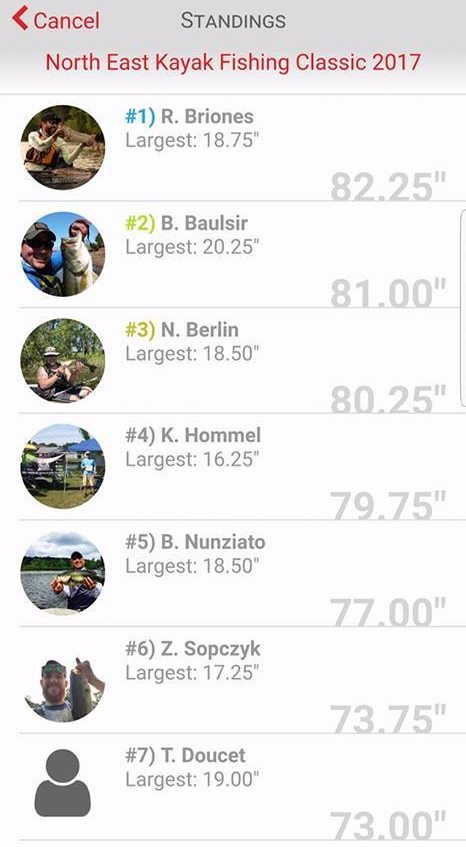 I felt like my knees started to shake, but the only thing to my advantage was that I could already see Brian paddling back to the launch and it was already close to 2:00 PM.  My only hope was that no one was “sandbagging” and waiting until closer to 3:00 PM to submit their catches.

Once at the meeting place we all gathered and we were able to see each other’s faces (too dark at 6:00 AM) and started mingling and commencing the life-long friendships exchanging fishing stories and eating apple cider donuts and drinking cider that Justin and his wife were kind enough to bring for all of us.

The judging of the pictures took place and I ended up winning my first ever kayak bass fishing tournament!  Needless to say I was excited about the win, but I was most excited to know that Canada was bringing home the trophy and hosting next year’s event (still deciding where) and my new brothers and sisters in kayak fishing will get to visit our beautiful country!

Next year will be a blast! Bigger and better than the first one!  Hopefully many more anglers are able to participate in the event.

Congratulations to Brian Baulsir and Nick Berlin for winning second and third place and again to Brian for catching the biggest fish of the tournament.  A beautiful 20.25″ pig! 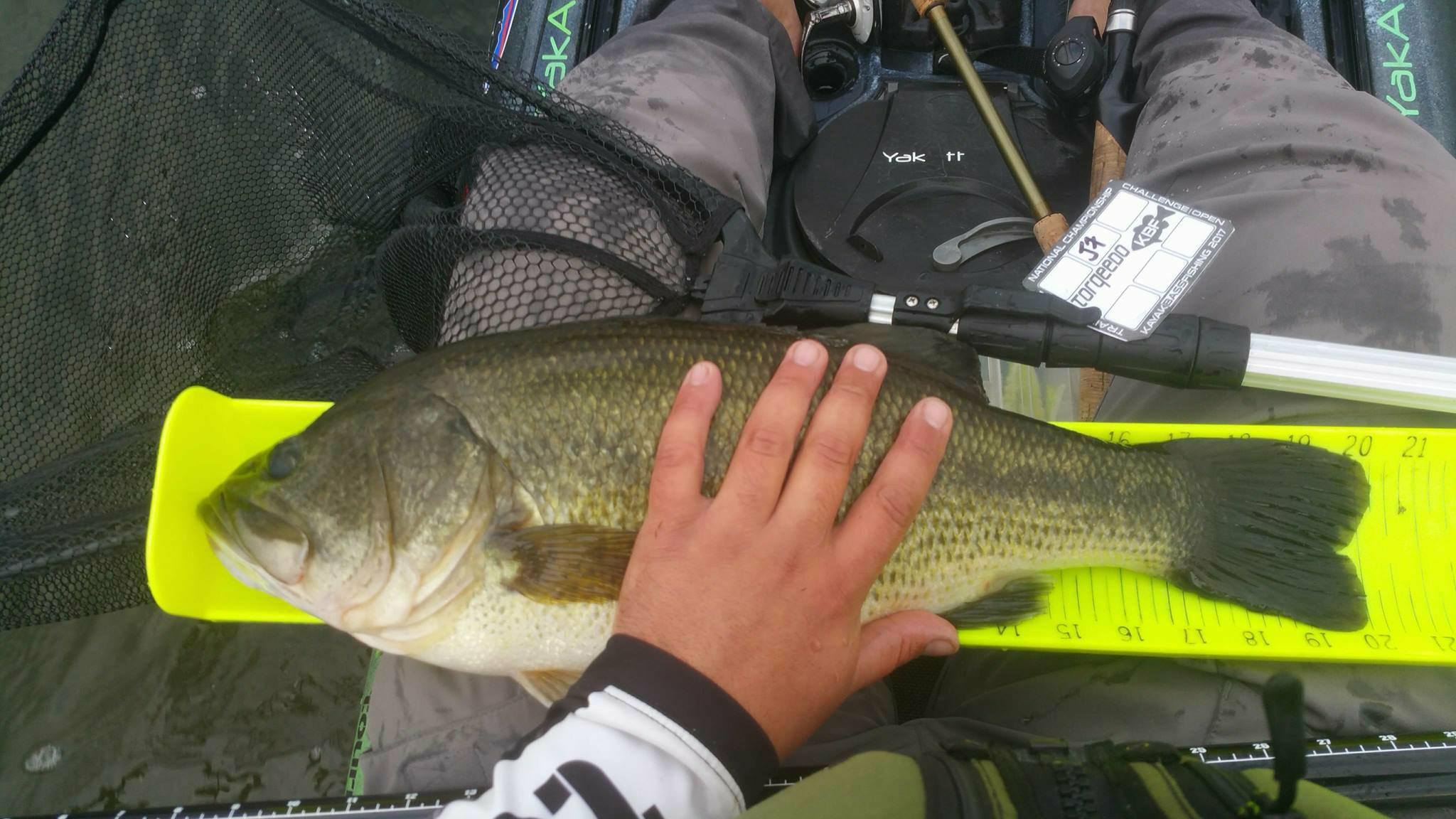 Until next year my friends!